Raiders Close Out Homestand With Win Over Warriors 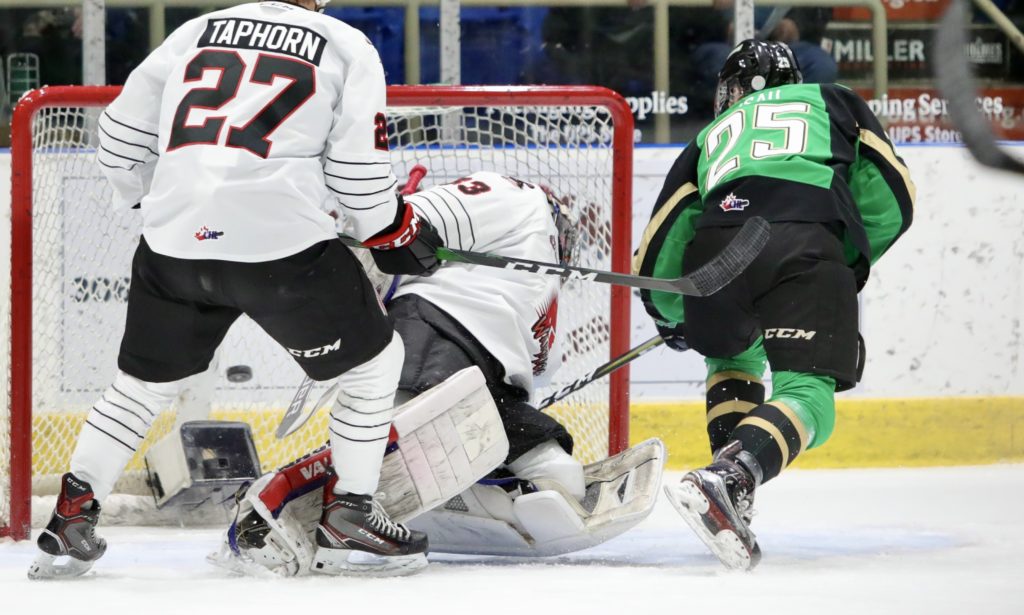 Prince Albert, SK – The Prince Albert Raiders (7-0-2-0) wrapped up their six-game homestand with an 8-4 win over the Moose Jaw Warriors (5-3-0-0) on Saturday night at the Art Hauser Centre.

The win pushed the Raiders’ record to 5-0-1-0 over the homestand.

Moose Jaw got the scoring started 4:16 into the opening frame. Brayden Tracey, who had four points on the night for the Warriors, dropped a pass for Alek Sukunda. The defenceman put a shot on goal and Ryder Korczak tipped the puck past Boston Bilous to make it 1-0.

About four minutes later, the Raiders answered back. On a delayed penalty call, Wiesblatt had the puck in the offensive zone. He found Nolan Allan at the point and the rookie defenceman switched with Remy Aquilon. Allan found a lane and put a shot on net that beat Bailey Brkin for his first career WHL goal.

Less than a minute later, the Raiders took the lead. Moe put a shot on goal that got through Brkin, but hit the post. Usau pounced on the rebound and hit the empty net for his fourth goal of the year.

Late in the first, Usau tallied his second of the night. Fonstad dug a puck out from behind the net and centred for Usau, who was standing at the top of the crease. Usau one-timed the pass past Brkin to bring his goal total to five on the season.

Watts extended the Raiders’ lead 1:22 into the second period. Protas collected a rebound in front of the net and slid it across the crease for the former Moose Jaw Warrior and Watts made no mistake for his fourth of the season.

Four minutes later, Moose Jaw cut the lead in half. Tracey got a pass in front of the net from Jadon Joseph, spun, and fired a shot that beat Bilous for the Anaheim Ducks prospect’s first of the year.

It stayed 4-2 until there was 5:00 to play in the second. Wiesblatt gained the zone and centred a pass for a cutting Protas. The Washington Capitals prospect redirected the pass over Brkin for his fifth of the year.

Less than a minute later, the Warriors made it a two-goal game again. On a passing play started by Korczak, Tracey hit Owen Hardy with a cross-ice pass and the overager one-timed his shot past a sprawling Bilous to make it 5-3 after two periods.

Early in the third, the Raiders restored their three-goal advantage. Moe carried the puck into the zone and dished to Usau. The rookie, who drew the attention of three Warriors defenders, centred a pass for Fonstad who scored his second goal of the season.

The Raiders added their seventh goal on a power play at the 5:28 mark. Kaiden Guhle’s shot was stopped by Brkin, but Usau got the rebound. He made a cross-crease pass for Protas and the Capitals prospect beat Brkin for the second time on the evening.

Midway through the frame, the Warriors got one back. Joseph scored his fourth of the year make it a 7-4 game.

With time winding down, the Raiders made it eight. Remy Aquilon hit Daniil Stepanov with a stretch pass. The former Warrior carried the puck in and snapped a shot past Brkin for his first as a Raider and of the season to round out the scoring.

Boston Bilous picked up his sixth win of the year with a 11-save effort. Brkin stopped 25 shots for the Warriors.