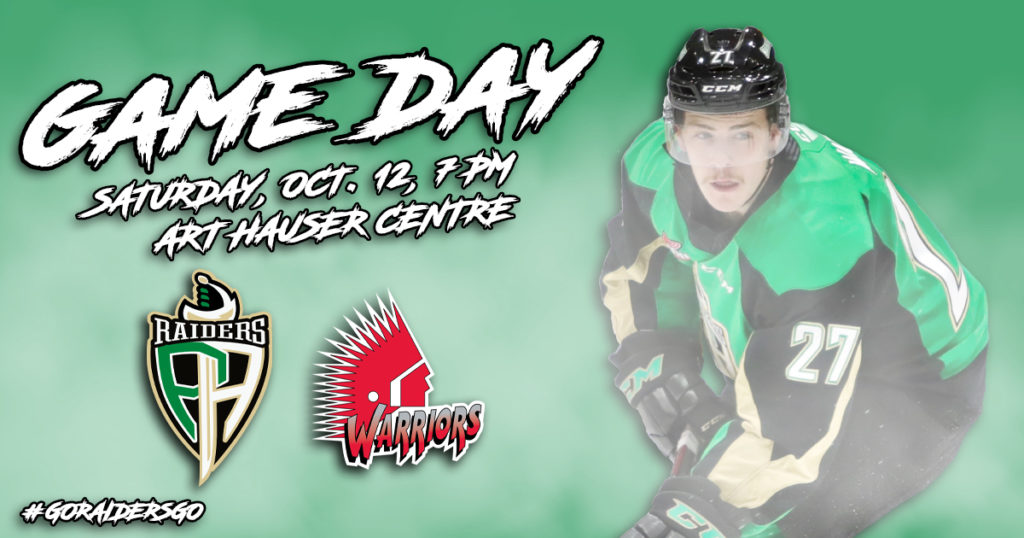 RAIDER REVIEW: The Raiders (6-0-2-0) close out their homestand tonight against the Moose Jaw Warriors (5-2-0-0) at the Art Hauser Centre. Last night, the Raiders defeated the Lethbridge Hurricanes 4-2 in Prince Albert. Spencer Moe had a pair of goals to pace the offence, while Cole Fonstad had three assists. Boston Bilous made 32 saves to pick up his fifth win of the season.

ON THE BOARD: Spencer Moe scored his first two goals of the season last night against the Hurricanes, doubling his point total to four through eight games. Friday was just the second multi-goal game of Moe’s career. The last multi-goal effort was during the Calgary product’s rookie season on Dec. 10, 2016 against the Moose Jaw Warriors.

#WHL LET/PA: In @PARaidersHockey Spencer Moe’s 208th career game, he does something he hadn’t done since his 27th (12/10/16 at Moose Jaw) – light the lamp twice in the same game. Reaches and crosses the 25 career goal plateau in the process. 4 points over the last 5 games.

TRIPLE PLAY: Cole Fonstad recorded the fourth three-assist performance of his WHL career last night. All four of those games have come since Dec. 27, 2018. His latest was on Feb. 23, 2019 when he had a goal and three helpers against Brandon.

SHUTTING THE DOOR: Boston Bilous faced his busiest night of the season so far last night against Lethbridge when he faced 34 shots. It was the first time this season the Langley, BC product faced 30 or more shots in a game.

CLIMBING: With an assist on Friday, defenceman Kaiden Guhle now has six points in his last three games. The 2020 NHL Draft eligible defenceman is tied for fifth among WHL defencemen in scoring with seven points.

HEATING UP: Rookie Ilya Usau is starting to find his offensive touch. The Denver, CO product has four points during his current three-game point streak. Also, all five of his points have come during the Raiders’ recent homestand.

NEXT UP: The Raiders kick off their US Division road trip on Saturday, Oct. 19 in Everett against the Silvertips. Game time is 8:05 p.m. The next Raiders’ home game is Friday, Nov. 1 against the Regina Pats. Puck drop is 7 p.m. Tickets are available at the Raiders Office and online here.