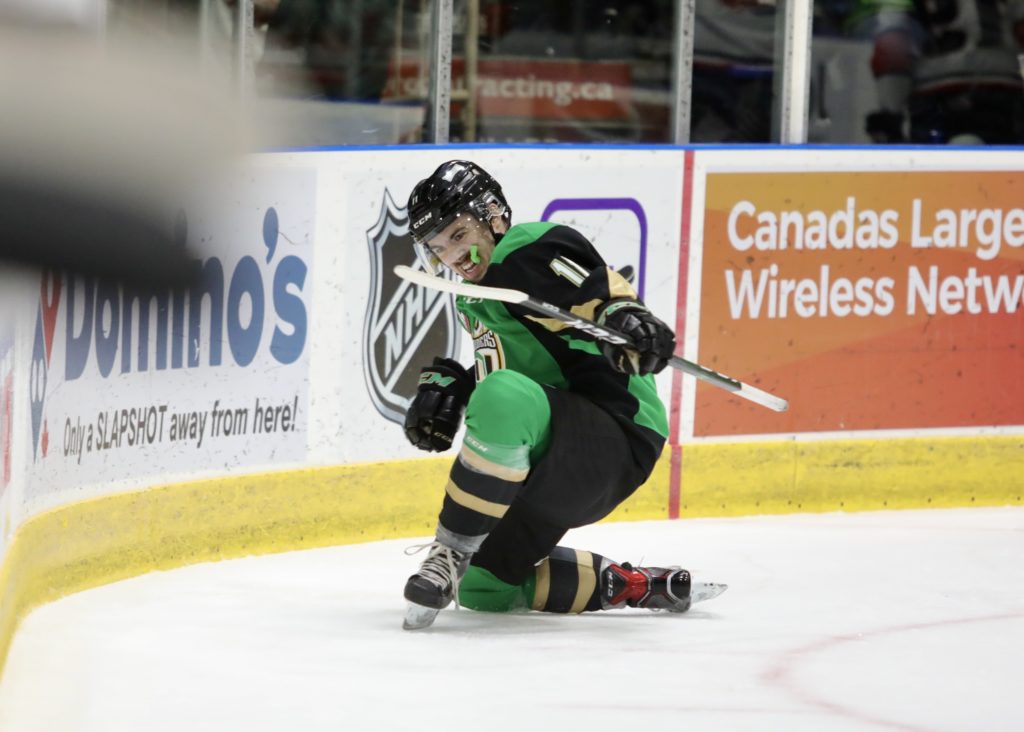 Prince Albert, SK – Spencer Moe scored his first two goals of the season as the Prince Albert Raiders (6-0-2-0) downed the Lethbridge Hurricanes (3-3-0-1) 4-2 on Friday night at the Art Hauser Centre.

Ilya Usau chipped in a goal and an assist while Cole Fonstad had three helpers as the Raiders extended their winning streak to three games.

Moe opened the scoring at the 11:28 mark of the first period. Usau carried the puck into the zone and battled through a check. He put a pass into the slot that found Moe and the Calgary product one-timed a shot past Bryan Thomson.

About two minutes later, the Hurricanes tied it up. Justin Hall forced a turnover in the neutral zone and started a two-on-one. Hall held and then fed Ty Nash and the rookie beat Boston Bilous for his first goal in the WHL.

Before the end of the second, the Raiders regained their lead. Just after a power play expired, Zack Hayes put a shot on goal that got through traffic in front and beat Thomson for his second goal of the year.

The lead held until late in third. Dino Kambeitz won an offensive zone faceoff back to Koletrane Wilson. The Hurricanes defenceman’s shot from the top of the right faceoff circle found its way past Bilous to tie the game at 2-2.

Less than a minute later, Moe restored the Raiders’ lead. After dishing to Fonstad, Moe entered the zone. Fonstad carried the puck into the zone and dropped a pass to his linemate. Moe took the pass and snapped a quick shot that beat Thomson for his second of the game.

The Raiders held off the Hurricanes for the rest of the game. With approximately 20 seconds left, Usau cleared the zone to Fonstad. The Montreal Canadiens prospect banked it up the boards for Usau, who found the empty net for the second consecutive game to seal the win.

Bilous finished the game with 32 saves for his fifth win of the year. Thomson stopped 21 shots for the Hurricanes in the loss.

The Raiders are back at home on Saturday night for their final home game in October when they take on the Moose Jaw Warriors (5-2-0-0). Following Saturday, the Raiders hit the road for their biennial US Division road trip. Puck drop for Saturday’s game against the Warriors is 7 p.m. Tickets are available online here and the Raiders Office.