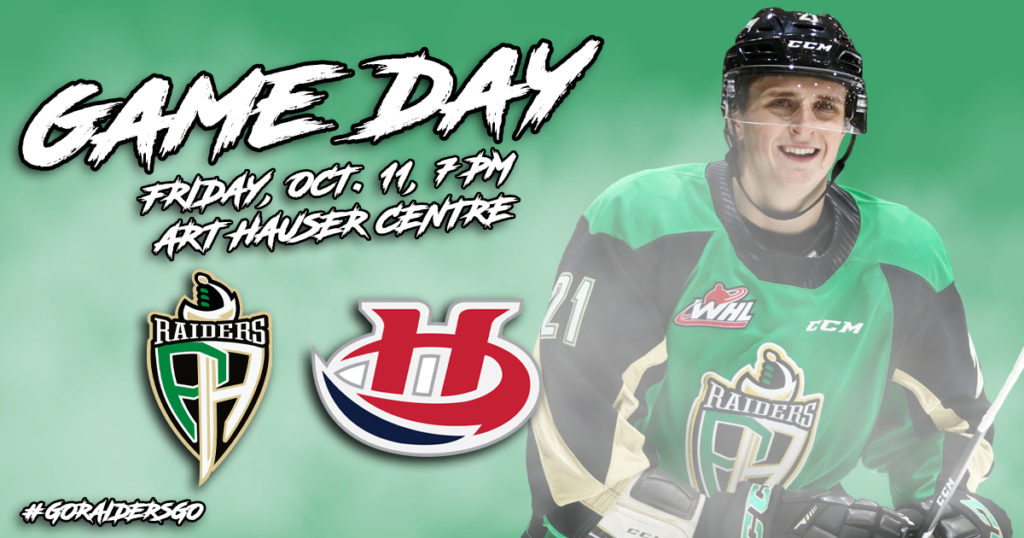 RAIDER REVIEW: The Raiders (5-0-2-0) take on the Lethbridge Hurricanes (3-2-0-1) tonight at the Art Hauser Centre. On Tuesday, the Raiders won their WHL Championship rematch against the Vancouver Giants 4-2. Aliaksei Protas led the way with a goal and two assists in the win. Carter Serhyenko stopped 25 shots to pick up his first career win in his WHL debut.

THE VIPER STRIKES: Aliaksei Protas registered his second three-point game of the season on Tuesday night against the Vancouver Giants. Last season, Protas had one three-point effort during the regular season and three in the 2019 WHL Playoffs. The three-point night also put Protas over 50 career points. The Washington Capitals prospect leads the team in scoring and is second in league scoring with 11 points.

STILL ROLLING:  With an assist on Tuesday night against his former team, Brayden Watts has a point in every game played as a Raider and is on an eight-game point streak dating back to last regular season. In that span, he has totalled three goals and 10 assists.

BACK TO BACK: For the first time in his WHL career, Kaiden Guhle has scored in consecutive games. His goal on Tuesday night was also the game winner.

MOVING UP: On Wednesday, the Raiders moved up in the Kia CHL Top 10 rankings to the sixth spot. Last week, the Raiders were an honourable mention on the list. Prince Albert is one of three WHL teams to crack the Top 10.

ROSTER NEWS: The Raiders re-assigned goaltender Brett Balas to the AJHL’s Drumheller Dragons. Balas had not played in a game for the Raiders this season.

NEXT UP: The Raiders wrap up their homestand on Saturday night against the Moose Jaw Warriors (4-1-0-0). It’s the final home game before the Raiders head out on their US Division road trip. Puck drop is 7 p.m. Tickets are available online here and at the Raiders Office.