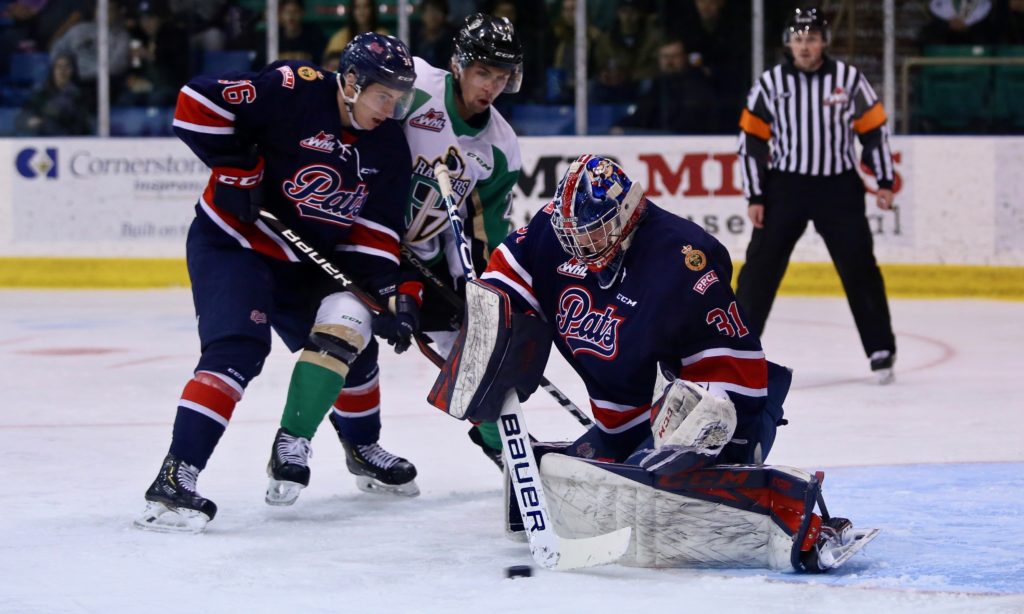 It was the Raiders’ first loss at the Art Hauser Centre this season and snapped a five-game winning streak. Dean McNabb earned first star honours for the game with a 43-save performance.

The Pats got one the board just 18 seconds into the game. Following a defensive zone turnover, Logan Nijhoff stopped Duncan Pierce’s, turned and fired a backhander past Donovan Buskey to make it 1-0.

Later in the first, Regina increased its lead. Liam Schioler fired a slap shot from the left wing that beat Buskey under the bar to give the Pats a 2-0 advantage at the 8:01 mark.

Shortly after the media timeout, the Raiders cut into the lead. Off of a scrummed faceoff in the offensive zone, Ozzy Wiesblatt dug the puck out of the group and fed Noah Gregor in the slot. The San Jose Sharks prospect walked in and wired a shot past McNabb to make it 2-1 after 20 minutes.

At that point, the Raiders held a 10-6 advantage on the shot clock and only allowed another seven all game.

However, the Pats were able to get in the way of the Raiders’ shots throughout the rest of the game. The Raiders had their chances to tie it up. A Gregor shot looked destined for the far, top corner, but a Pats defenceman knocked the puck out of the air. Later, Max Martin found himself alone in the slot, but couldn’t connect on a backhand feed to Cole Fonstad.

Late in the third, the Raiders drew two penalties to have 48 seconds of five-on-three time, but were unable to put a puck past McNabb. On the night, the Raiders finished 0-7 with the man advantage.

Buskey finished with the game with 11 saves on the evening for his first loss between the pipes as a Raider.

The Raiders will have a chance for retribution on New Year’s Day when they travel to Regina for a rematch with the Pats at the Brandt Centre. Game time is 4 p.m. on Tuesday.

The next Raiders’ home game is on Friday night when the Moose Jaw Warriors (19-8-5-1) make their first trip to Prince Albert this season. Then, the Raiders host the Saskatoon Blades (22-11-5-0) on Saturday. Puck drop for both games is 7 p.m. Tickets are available at raiderhockey.com and the Raider Office.