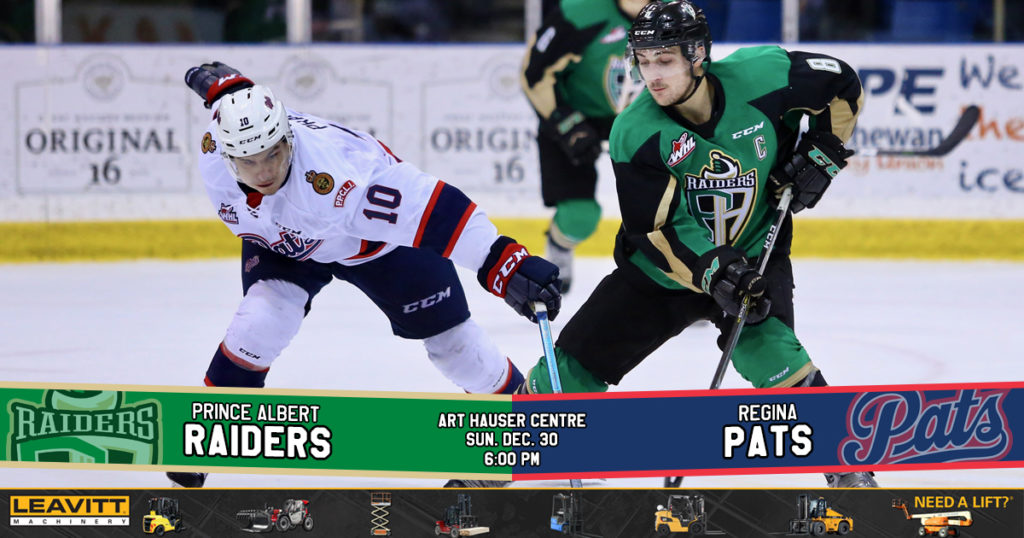 RAIDER REVIEW: The Raiders (33-2-0-1) play their final game of 2018 tonight when they host the Regina Pats (11-24-0-1) tonight at the Art Hauser Centre. On Friday, the Raiders knocked off the Saskatoon Blades 4-2 at the Art Hauser Centre to sweep the home-and-home series. Noah Gregor (two goals, one assist) and Cole Fonstad (one goal, two assists) each had three-point nights in the win. Aliaksei Protas scored the Raiders’ other goal, which also was the game winner. Donovan Buskey made 34 saves to pick up his ninth win of the year.

VS. REGINA: This is the fifth meeting of the year between the Raiders and the Pats. The Raiders have won the previous four contests and have outscored the Pats 13-4 in the Art Hauser Centre this season.

ONE YEAR DIFFERENCE: Friday’s win over the Saskatoon Blades was the Raiders’ 33rd of the year, surpassing their win total from all of last season. The Raiders finished last season with 77 points in 72 games played. This year, they have earned 67 out of a possible 72 points.

GAME WINNERS: Aliaksei Protas became the 15th Raider this season to score a game-winning goal with his marker on Friday night against Saskatoon. Brett Leason leads the team with seven game winners this season.

HIGH VOLUME: Donovan Buskey’s 34-save effort were the second most stops he has made in a win in his WHL career. His highest save total in a win came on Dec. 16, 2017 as a member of the Spokane Chiefs with a 37-save performance against the Portland Winterhawks. The Vancouver, BC product has faced 30 or more shots eight times in his WHL career, posting a 6-1-0-1 record in those eight contests.

WORLD JUNIOR WATCH: Brett Leason scored the game-winning goal for Team Canada in Saturday night’s 5-1 win over the Czech Republic at the World Juniors in Vancouver. Through three games at the tournament, Leason is tied for fifth in scoring with three goals and two assists.  Up next for Canada is a date with the Russians on Monday night.

NEXT UP: The Raiders head to The Queen City on Tuesday for a New Year’s Day rematch against the Regina Pats at the Brandt Centre. Game time is 4 p.m. The next Raiders’ home game is Friday, January 4 against the Moose Jaw Warriors. Tickets are available at raiderhockey.com and the Raider Office.