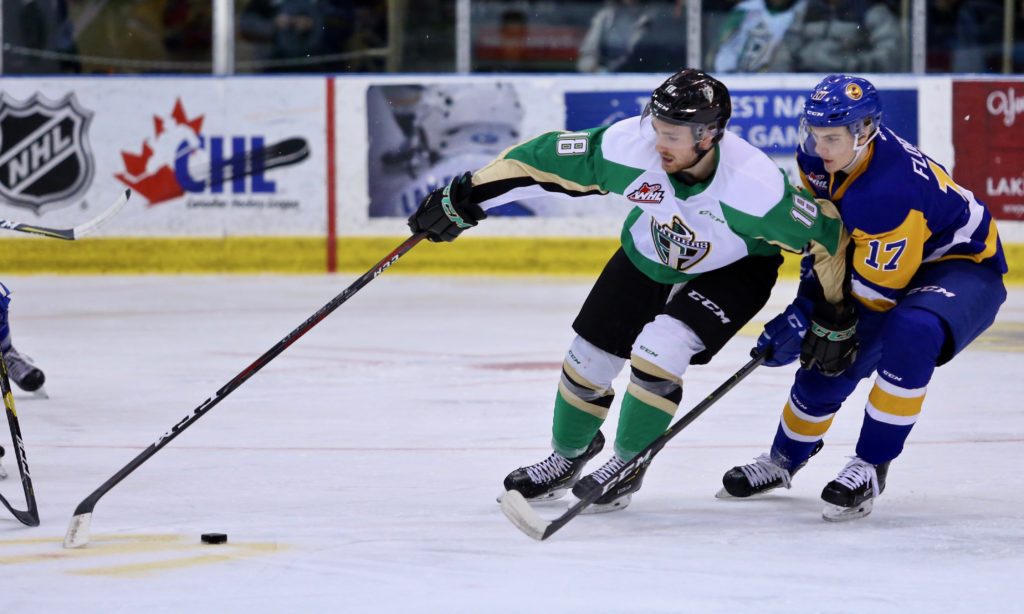 Prince Albert, SK  –  Noah Gregor and Cole Fonstad each had three-point nights to lead the Prince Albert Raiders (33-2-0-1) to a 4-2 win over the Saskatoon Blades (21-11-5-1) on Friday night at the Art Hauser Centre, sweeping the home-and-home series to start the second half of the year.

Gregor had a pair of goals for the third-straight contest and added an assist. Fonstad contributed a goal and two assists.

The Blades got the scoring started 5:25 into the opening period. Gary Haden jammed the puck through Donovan Buskey on the power play to make it 1-0.

Four minutes later, Gregor got the Raiders on the board during a five-minute power play after Brandon Schuldhaus was assessed a major penalty for a knee-to-knee hit on Max Martin. Fonstad made a cross-crease pass from the goal line and Gregor snapped it past a sprawling Dorrin Luding to tie the game at 1-1.

Before the end of the period, the Blades regained the lead. Kristian Roykas Marthinsen’s shot was blocked, but the Norwegian collected his own rebound and slid it through Buskey with 3:37 left in the period.

Buskey rebounded in the second period to keep it a one-goal game. The North Vancouver product stood tall on a four-minute Blades power play. Then, late in the frame, he stopped Kirby Dach on a breakaway. Fonstad collected the rebound and connected on a stretch pass with Gregor. The San Jose Sharks prospect beat Luding on a breakaway to make it a 2-2 game with 20 seconds left in the frame.

Aliaksei Protas broke the tie midway through the third period. With 9:27 to play, the Belarusian weaved through traffic and fooled Luding with a shot from the top of the slot to put the Raiders up 3-2.

The Raiders kept up the pressure throughout the period. Late in the frame, the Blades pulled their goalie for the extra attacker, but didn’t generate much pressure. Fonstad was the beneficiary as he put the puck into the empty net with 10 seconds to play to round out the scoring.

Buskey finished the game with 34 saves for his ninth win of the year. Luding made 32 saves in the loss.

Up next for the Raiders is a date with the Regina Pats (11-24-0-1) on Sunday evening at the Art Hauser Centre. Puck drop is 6 p.m. Tickets are available at raiderhockey.com and the Raider Office.

Half-season tickets are now available for a limited time. Stop by the Raider Office for more information. The packages are only available until Sunday, December 30.