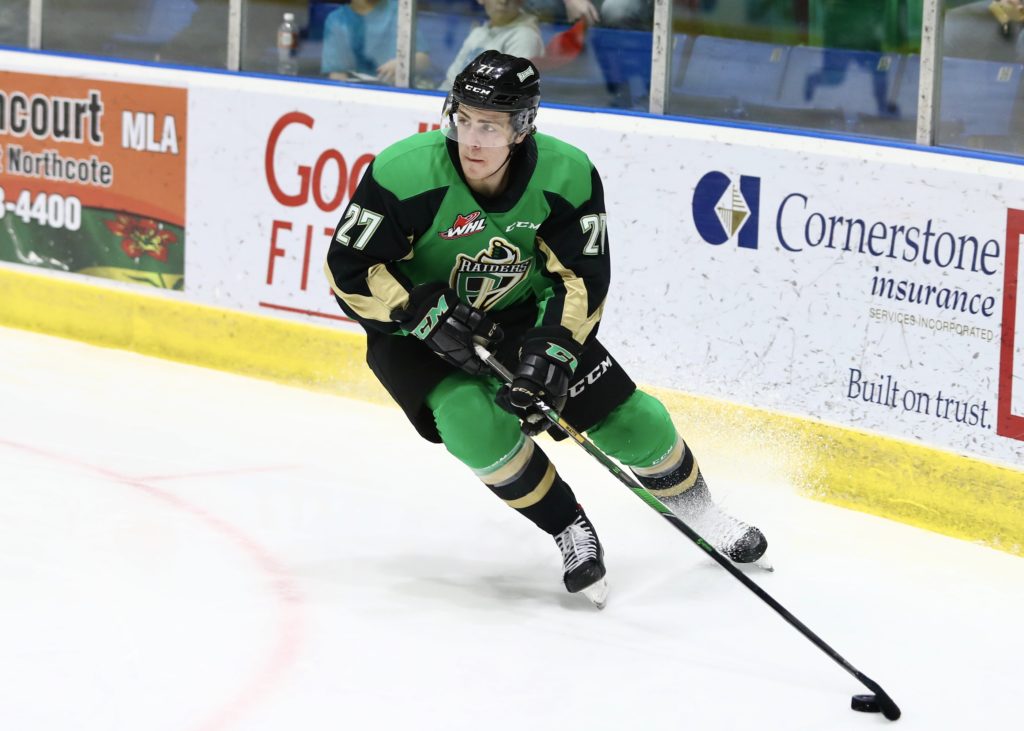 Prince Albert, SK – Brayden Watts made the teddy bears fly, but the Prince Albert Raiders (20-8-3-1) were doubled up 4-2 by the Kamloops Blazers (21-9-2-1) at the Art Hauser Centre on Saturday for the annual Teddy Bear Toss Presented By Canadian Tire.

Watts is the fifth consecutive overager to score the Teddy Bear goal for the Raiders. Evan Herman also scored in the loss.

Orrin Centazzo had two goals for the Blazers, while Max Martin chipped in a pair of assists from the back end.

Herman had a great chance to open the scoring shorthanded. The rookie winger pounced on a turnover in the neutral zone and had a breakaway on Dylan Garand. Herman deked, but wasn’t able to stuff his shot past the Blazers netminder.

All smiles for the Teddy Bear Toss time in northern Saskatchewan as @PARaidersHockey forward @brayden_watts29 scores the special goal!

Late in the period, the Blazers opened the scoring. Orrin Centazzo picked the corner off the rush, beating Carter Serhyenko with 3:31 to play in the opening period.

Serhyenko kept it a one-goal game in the second period. Martin came out of the corner and cut across the top of the crease. The rookie netminder stayed with him and snagged Martin’s backhanded attempt with his glove.

Midway through the middle frame, the Blazers were able to take advantage of a double minor. Ryan Hughes took a pass at the top of the left faceoff circle, dragged around a defender, and wired a shot through a screen to make it 2-0 at the 9:45 mark.

On the same double minor, Kamloops extended its lead. Logan Stankoven let a shot go from inside the left faceoff circle that beat Serhyenko to give the Blazers a 3-0 lead with 8:54 to play in the second.

The Raiders got on the board midway through the third period. Watts worked a give-and-go play in the corner with Reece Vitelli and fired a quick shot over Garand’s glove to send the teddy bears flying with his 16th goal of the season with 8:33 to go.

Four minutes later, Herman brought the Raiders back within one. From the hashmarks on the left wall, the rookie put a shot on goal that got through Garand for his seventh of the season to make it a 3-2 game.

Though the Raiders pressed for the equalizer, Kamloops restored its two-goal lead with 2:51 remaining. Zane Franklin dug a puck out of the corner and hit Centazzo with a pass that he one-timed past Serhyenko to wrap up the scoring at 4-2.

Serhyenko finished the game with 28 saves in the loss. Garand stopped 25 shots to pick up the win.

The Raiders close out their schedule before the holiday break on Sunday afternoon in Saskatoon against the Blades at SaskTel Centre. Puck drop is 4 p.m. Head to The Rock And Iron Sports Bar to watch the game, or listen on 900 CKBI.

The next Raiders’ home game is on Friday, December 27 in the first leg of a home-and-home series with the Blades to kick off the second half of the season. Puck drop is 7 p.m. Tickets are available at the Raiders Office and online here.