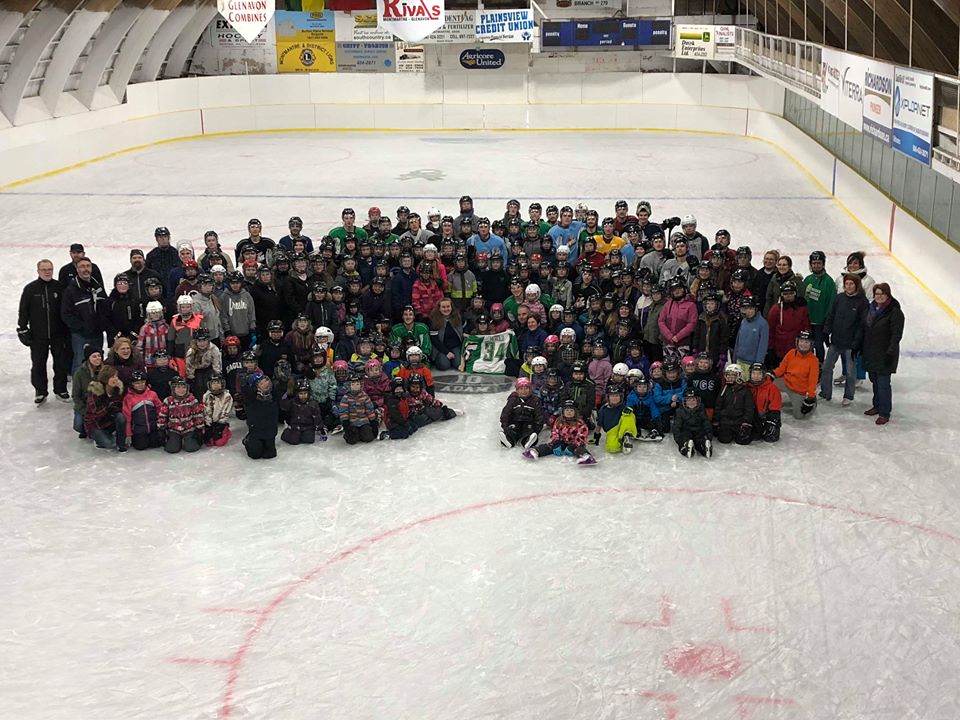 This story was provided to the Raiders by Trevor Redden and paNOW.

On a day off between road games in Swift Current and Brandon, the Prince Albert Raiders pulled off the TransCanada Highway at White City and made the trip 70 kilometres southeast to Montmarte, a community that, like the Raiders, had lost one of its own this year.

Waiting for the team on this brisk but sunny Thursday afternoon were the family, friends, classmates, teachers, coaches, and fellow community members of Adam Herold, the Prince Albert prospect who lost his life in the Humboldt Broncos bus accident on April 6.

If not for tragedy, the defender would have more than likely been with his Raider teammates making their way to Brandon to take on the Wheat Kings, but instead it was his teammates coming to visit his hometown.

Herold was selected 35th overall in the 2016 bantam draft by Prince Albert from the Prairie Storm in Balgonie. After two successful seasons with the Midget AAA Regina Pat Canadians, serving as team captain as a 16-year-old, Herold was expected to make the jump to the Raiders on a full-time basis this season.

As the bus pulled up to the Montmartre Arena, Adam’s father Russ stood out front and welcomed the team to his community.

“It’s nice for our family, it’s nice for the community for the Raiders to come today. It’s all about respect, and learning where your teammates come from, what made them the person that they are, and where they got their values from, where they grew up, that sort of thing. It’s really nice that they came today,” said Herold.

Admittedly, it was difficult not to think about how different the day could have been.

After unloading the bus, the Raiders moved on to the Montmarte School, where the staff, student body, and community members gathered to greet the team that Herold had become a part of.

It didn’t take long once setting foot inside the school to see the impact the young man had made in his community.

On display in the hallway was a hand-crafted bench constructed of hockey sticks, which was built by the school’s practical applied arts class. The bench which lay underneath a framed Pat Canadians jersey with Herold’s name and number 10 on it. Next to that were two pieces of artwork. One was a collage of Herold’s hockey photos with his signature across the top, and the other was a sketch depicting a Humboldt Bronco player with angel wings.

Just steps down the hallway from this display was Herold’s locker, which fittingly enough was locker number 10. The school has left it unused, and his classmates have decorated it with pictures of Herold doing all the things he loved to do: playing hockey, being outdoors, and spending time with family and friends. On the inside were personal notes to Adam written on sticky notes and placed on the back of the door.

Furthermore, the school has also launched initiatives in Herold’s name. A pair of students have undertaken the job of converting a classroom to the Adam Herold Fitness Centre with the goal of helping students reach their athletic goals and improving their physical wellbeing. The fitness centre started with a donation from the Herold family, and the two students driving the initiative are selling Adam Herold Memorial shirts to help raise further funds for the project.

Outside, a courtyard area is being revitalized and dedicated as a memorial in a project initiated by the school community council which consists of parents from the community. The official posting of the memorial sign in the courtyard will take place at a spring BBQ for this year’s graduating class, the same one that Adam would have been a part of.

After a brief tour of the school, the Raiders were joined in the gymnasium by the entire student body, staff, and community members, who all gave the team a lively welcome as they were introduced.

Captain Brayden Pachal shared a few favourite stories of Herold on behalf of his Raider teammates, and Head Coach Marc Habscheid thanked the family and community for welcoming the team, and shared a message of respect with all those in attendance. He referenced a post on twitter from Russ Herold earlier in the day, saying “#Respect” in response to the Raiders’ visit on Wednesday to the Swift Current Broncos’ Memorial site. Habscheid said that it was important for the team to come to Montmartre to show respect to Adam and his family, as well as his community.

From there, school was let out early and everybody headed one block west to the arena, where well over 100 people took to the ice to skate with the visiting Raiders.

The outpouring of support for the visiting hockey team illustrated the capabilities of the community of approximately 500 people. Russ Herold expressed the significance of the community for their family this year.

“They’ve helped to keep us going. People have chipped in and helped us at seeding time and harvest and neighbours have helped us out and people brought food at the time,” said Herold.

“Phone calls to see how you are or just a text message, people are always thinking about you and keeping you in their thoughts. You know that they want only the best for you and they hope that you can heal and get through this.”

While the family appreciates the outpouring of support that they’ve received, they are now looking to give back to the surrounding area in ways that would have been important to Adam.

The Adam Herold Legacy Foundation has been launched with the intention of providing opportunities for Saskatchewan youth to develop both their hockey skills and their leadership potential.

“You don’t have to be a hockey player to be a leader, some kids are going to go on to be a doctor or a teacher or what have you. [We just want to] show the kids values in life and how to be a good person in the community, and at the same time, expose these kids to high level training in hockey on the ice and off the ice to help expose them to what you have to do to move on.”

The foundation currently consists of a pair of programs, focused on providing top-end hockey training on and off the ice for underserved rural communities in Saskatchewan and building leaders in similar areas both on the ice and in the community.

Additionally, the foundation presents the Adam Herold Memorial Award to the Top Defensive Defenseman in the Saskatchewan Midget AAA Hockey League who exemplifies superior leadership on the team.

Herold hopes the foundation will continue to serve others the way that Adam always tried to do.

“I would hope that he inspired some of the kids in town just to see that he’s a small-town kid, he wasn’t from a big centre. He was a good hockey player from a young age, but he always aspired to play at a higher level and showed the hard work and determination and the drive to succeed to move up to a higher level, and what it took,” said Herold.

Once the Raiders had visited the school, hit the ice for a community skate, and held a brief practice, the team joined the Herold family for a private dinner at their farm before carrying on to Brandon ahead of Friday night’s game.

While the heartbreak will never go away in Montmartre and in all the other communities affected by this tragedy, the small town in southeastern Saskatchewan showed its compassion in the way they came out to support the Raiders in the same way they’ve supported each other all this time.

It was an honour to go to Montmartre today and pay our respects to the Herold family and the entire community. Thank you for giving us such a warm welcome. pic.twitter.com/ewa4Rdstfp