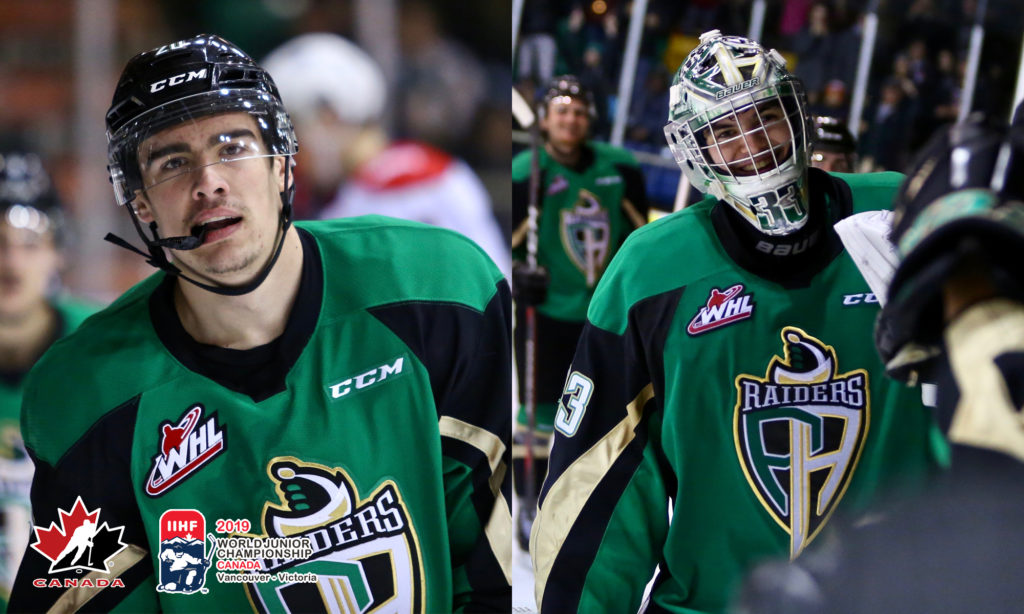 Prince Albert, SK – A pair of Prince Albert Raiders will have a chance to represent Canada at the 2019 World Junior Hockey Championship in Vancouver and Victoria, BC.

On Monday, winger Brett Leason and goaltender Ian Scott were named to Hockey Canada’s selection camp. The two Raiders are part of 34 players selected for the camp that begins on Dec. 10 in Victoria.

Leason, from Calgary, leads the WHL in goals (27) and points (60). The 19-year-old has already blown past his career highs in all categories this year.

In November, Leason was given a “C” rating by NHL Central Scouting for the 2019 NHL Draft. That indicates a prospect in the fourth to sixth round.

Drafted by the Toronto Maple Leafs in 2017, Scott has participated in multiple Hockey Canada events. He donned the maple leaf for the Ivan Hlinka Memorial Cup, the 2017 IIHF World Under-18 Championship, and the 2015 World Under-17 Hockey Challenge. At the World U17s, Scott backstopped Canada White to a gold medal.

The 2019 World Junior Hockey Championship begins on Boxing Day in Vancouver and Victoria. The pre-tournament schedule begins on Wednesday, December 19 when Canada takes on Switzerland at the Save-On-Foods Memorial Centre in Victoria. Puck drop is 7 p.m. CT.

34 Team Canada hopefuls will #REPRESENT at the @SportChek Selection Camp in Victoria, B.C., ahead of the 2019 @HC_WJC. #WorldJuniors pic.twitter.com/KNkgmzGbA6

The Raiders continue their slate of games away from the Art Hauser Centre on Tuesday night when they head to Swift Current to face off against the Broncos (4-21-1-1) at the Innovation Credit Union i-plex. Puck drop is 7 p.m.

The next Raiders’ home game is on Saturday, December 8 against the Brandon Wheat Kings (13-7-3-3). Tickets are available at the Raider Office and at raiderhockey.com. Game time is 7 p.m.

Half-season tickets are now available for a limited time. Stop by the Raider Office for more information. The packages are only available until Sunday, December 30.