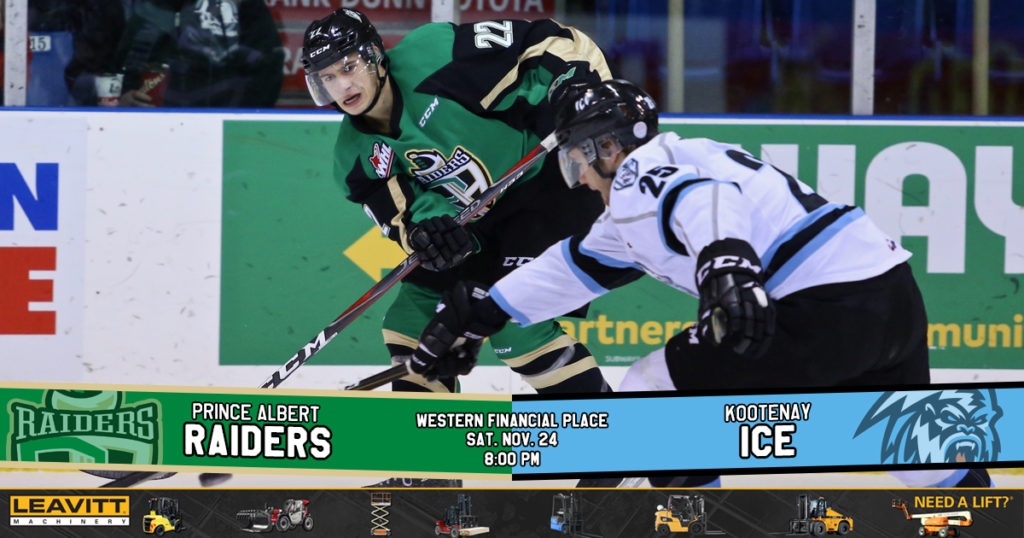 RAIDER REVIEW: The Raiders (22-1-0-0) head to Cranbrook tonight to face off against the Kootenay ICE (7-15-3-1) at Western Financial Place. Last night, the Raiders fended off a third-period surge to defeat the Tigers 7-3 in Medicine Hat. Heading into the third the Raiders led 4-1. After two early goals from the Tigers, Prince Albert regained control of the game with three goals in 86 after the media timeout. Brett Leason had two goals and two assists in the win for his third four-point performance of the year. Parker Kelly contributed two goals in the win, while both Brayden Pachal and Aliaksei Protas had a goal and an assist. Ozzy Wiesblatt scored the other Raiders’ goal. Ian Scott picked up his 19th win of the year by making 26 saves.

VS. KOOTENAY: This is the second game of the year between the Raiders and the ICE. The Raiders downed Kootenay 7-2 at the Art Hauser Centre on Nov. 2.

MORE WITH LESS: The Raiders’ shorthanded success has been well documented this season. One of the main reasons behind that is Brett Leason, who scored his fifth goal on the penalty kill this season. Entering Saturday’s games, Leason has more shorthanded goals than 19 other teams in the WHL. The Red Deer Rebels and Victoria Royals are the only teams with more than Leason with seven and six, respectively. Leason’s shorthanded goal on Friday was also the game-winning goal, which was his sixth winning goal of the year. That leads the WHL, putting him two ahead of three players with four game-winning goals this season.

HEATING UP: Brayden Pachal has been filling up the scoresheet of late. With a goal and an assist in Friday’s win, the Raiders’ captain now has four goals and 14 assists on the season. All but two of those points – both of them being assists – have come in the last 13 games played.

BACK IN THE GOAL COLUMN: Back in the lineup after missing a game due to illness, Ozzy Wiesblatt scored the first goal of Friday’s game against the Tigers. That goal was Wiesblatt’s third of the season and first since Sept. 30 against the Saskatoon Blades. The Raiders rookie from Calgary also has two assists for five points this season.

NEXT UP: The Raiders’ road trip continues on Tuesday night in Red Deer when they take on the Rebels (16-5-1-0) at the ENMAX Centrium. Game time is 8 p.m. CST. The next Raiders’ home game is on Saturday, Dec. 8 against the Brandon Wheat Kings. Puck drop is 7 p.m. Tickets are available at the Raider Office and raiderhockey.com.