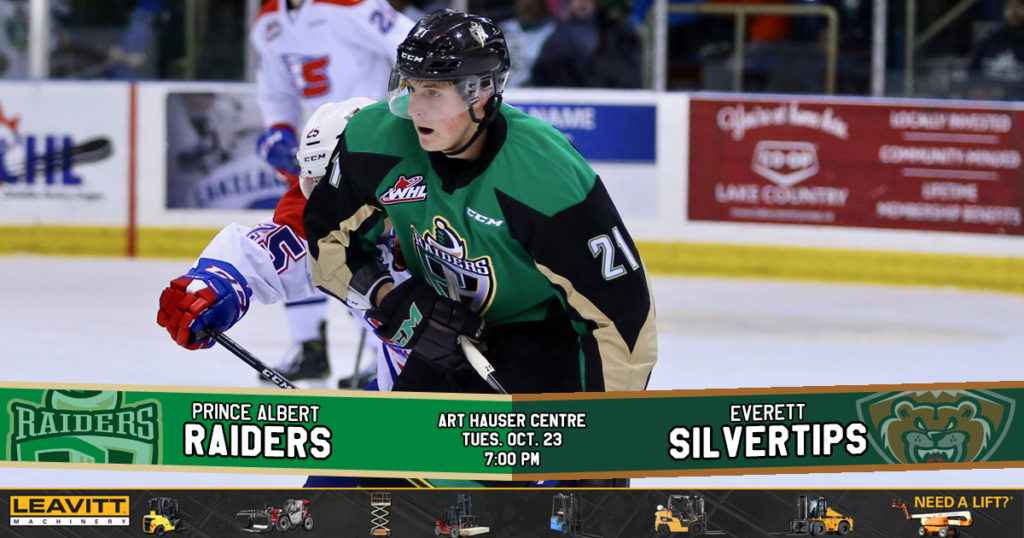 RAIDER REVIEW: The Raiders (12-1-0-0) take on another US Division team tonight when the Everett Silvertips (7-4-0-0) visit the Art Hauser Centre for the only matchup of the two teams this season. On Saturday, the Raiders extended their winning streak to five games with an 8-2 victory over the Spokane Chiefs. Noah Gregor and Jakob Brook each had a pair of goals on the evening. Sean Montgomery continued to fill the stat sheet with a goal and two assists. Konrad Belcourt, Zack Hayes, and Aliaksei Protas also scored for the Raiders. Brett Leason extended his point streak to 13 games with a pair of assists. Ian Scott earned his 10th win of the season between the pipes by stopping 32 Spokane shots.

VS. US DIVISION: Last year, the Raiders went 1-4-0-0 as they made their trek through the US Division last November. The lone win came against the Seattle Thunderbirds.

FAST START: Saturday’s victory over the Spokane Chiefs gave the Raiders their 12th win of the year in their 13th game. According to Jeff D’Andrea of paNOW, this is the fastest the Raiders have earned their 12th win since joining the WHL in the 1982-83 season.

CRAIG’S LIST: Brett Leason made his debut on Craig Button’s rankings for the 2019 NHL Draft, coming in at No. 46.

SNIPIN’ SEAN MONTGOMERY: Overage centre Sean Montgomery’s goal on Saturday night extended his goal-scoring and point streaks to four games, both being new career highs. Montgomery previously had a three-game goal streak in his rookie season from Jan. 28 to 31, 2015. His most recent three-game point streak was from Nov. 1 to 4, 2016.

FOR WHOM THE BEL(COURT) TOLLS: In his first game back in Prince Albert, defenceman Konrad Belcourt snapped a 37-game goalless skid with his first-period marker. Belcourt’s last WHL goal came on October 7, 2017 against the Prince George Cougars. The goal was also the Sherwood Park, AB product’s first point as a member of the Raiders.

NEXT UP: The Raiders hit the road tomorrow to take on the Moose Jaw Warriors (5-3-2-0) at Mosaic Place. Game time is 7 p.m. Head to The Rock And Iron Sports Bar at the Prince Albert Golf and Curling Club to watch the game. The next Raiders’ home game is on Saturday night when the Regina Pats (3-9-0-0) come to the Art Hauser Centre. Puck drop is 7 PM. Tickets are available at raiderhockey.com.