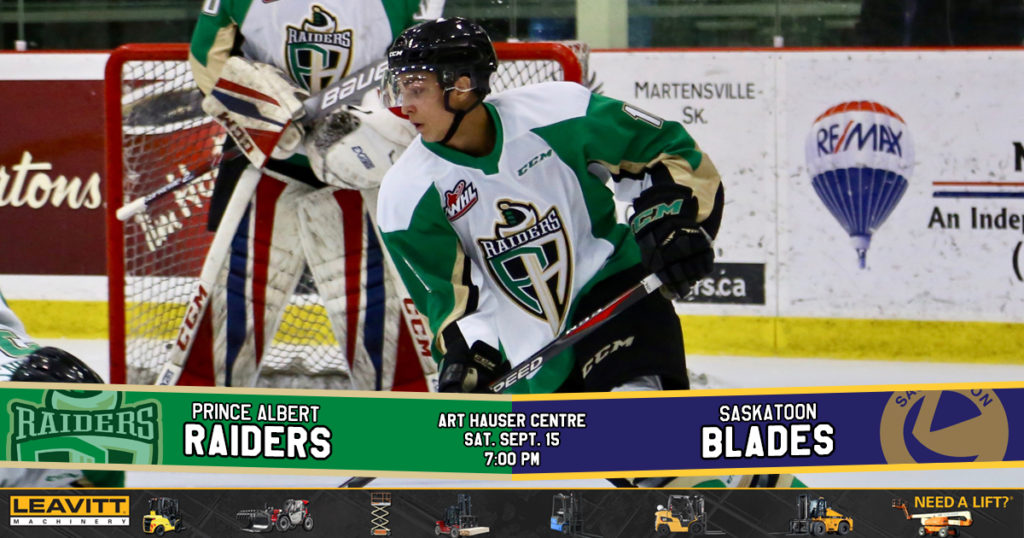 RAIDER REVIEW: The Raiders (1-2-0-1) close out their pre-season schedule tonight at the Art Hauser Centre against the Saskatoon Blades (6-0-0-0). Last night in Regina, the Raiders picked up their first win of the pre-season with a 5-2 victory over the Pats at the Brandt Centre. Justin Nachbaur led the way with a pair of goals. Brett Leason, Sean Montgomery, and Carson Miller also found the back of the net. Curtis Meger made the start and picked up the win with a 26-save performance.

PRE-SEASON DEBUTS: Cole Fonstad and Curtis Meger made their pre-season debuts on Friday night in Regina. Fonstad, who just returned from Montreal’s training camp, had an assist on Carson Miller’s goal. Meger was between the pipes for the first time, stopping 26 shots to pick up the win.

LEADING THE WAY: With all three players having a two-point night, Justin Nachbaur, Brett Leason, and Spencer Moe are tied for the team lead in points with five each. Nachbaur has three goals and two assists; Leason has two goals and three assists; and Moe has a goal and four helpers. Also, Nachbaur and Carson Miller are tied for the top spot with three goals scored during the exhibition schedule.

POWERING UP: For the third time this pre-season, the Raiders scored at least two power-play goals in a game. Justin Nachbaur, Sean Montgomery, and Carson Miller found the back of the net with the man advantage on Friday night. The Raiders now have seven goals in four pre-season games for 30.4%.

NEXT UP: The games count for real as the Raiders will play their 2018-19 Home Opener Presented By 900 CKBI and Great Western on Friday, September 21 against the Regina Pats. Puck drop is 7 p.m. Tickets are available at raiderhockey.com, the Raider Office, or by calling 306-764-5348.