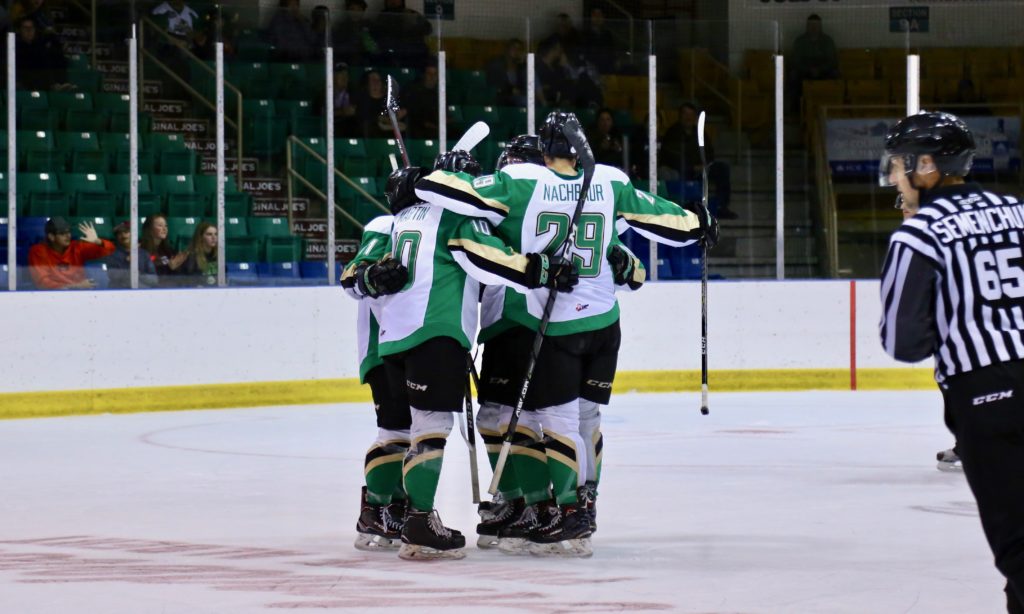 Justin Nachbaur led the way offensively for the Raiders with a pair of goals. Max Martin and Spencer Moe had a pair of assists.

Nachbaur’s first of the game opened the scoring 11:28 into the contest. The Cross Lake, MB product found the back of the net on the Raiders’ first power play of the game. Brett Leason put the Raiders up 2-0 when he pounced on a turnover and slipped the puck through goaltender Kyle Dumba’s five-hole.

In the second, Nachbaur extended the Raiders’ lead to three. He buried a behind-the-back pass from Moe at the 2:06 mark of the frame.

Logan Nijhoff singlehandedly got the Pats back into the game. The Comox, BC product scored back-to-back goals for Regina to make it a 3-2 game with 8:02 to play in the frame.

The Raiders responded late in the period. Sean Montgomery tallied a power-play goal with 44 seconds left on the clock to put his team up 4-2 heading into the second intermission.

Carson Miller added another insurance goal for the Raiders, sneaking a puck past Dumba on the power play 5:44 into the third to round out the scoring.

Curtis Meger made his first start of the pre-season for the Raiders, making 26 saves to pick up the win. Dumba stopped 20 shots for the Pats.

The Raiders are back at the Art Hauser Centre on Saturday night, wrapping up their pre-season schedule against the Saskatoon Blades. Puck drop is 7 p.m. Tickets are $10 for adults and $5 for fans 18 and under.

The Raiders open the 2018-19 WHL Regular Season on Friday, September 21 when the Regina Pats visit the Art Hauser Centre. Single-game tickets are now available at raiderhockey.com, the Raider Office, or by calling 306-764-5348.