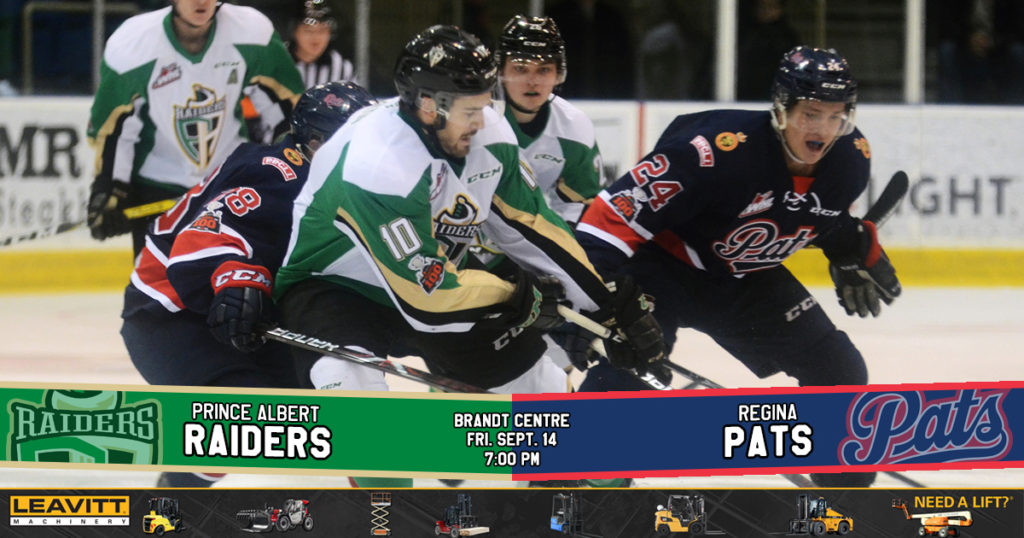 RAIDER REVIEW: The Raiders (0-2-0-1) head to Regina tonight to take on the Pats (3-2-0-0) at the Brandt Centre. On Saturday, the Raiders fell 4-3 in a shootout to the Saskatoon Blades at The Legends Centre in Warman. Spencer Moe, Kody McDonald, and Lane Kirk scored the Raiders’ goals, but no one was able to solve Koen MacInnes in the shootout. Donovan Buskey made his second consecutive pre-season start, stopping 33 shots in a losing effort.

NEW OPPONENT: Between the 2017-18 regular season, 2018 WHL Playoffs, and 2018 pre-season, tonight marks the first time in 12 games the Raiders have played someone other than the Moose Jaw Warriors or the Saskatoon Blades. Last pre-season, the Raiders split two meetings with the Pats, picking up a shootout win in Regina.

SPREADING OUT THE OFFENCE: The Raiders have had eight different goal scorers through three games of the pre-season. Only one player, Carson Miller, has recorded multiple goals to this point of the exhibition schedule with two to his name. Aliaksei Protas leads all skaters in scoring with four assists in three games.

WELCOME BACK: Cole Fonstad is back in Prince Albert. The Estevan product was returned to the Raiders after competing for the Montreal Canadiens in the 2018 Rookie Tournament. Fonstad was drafted in the fifth round by the Canadiens in June’s NHL Entry Draft.

ROSTER MOVES: The Raiders reassigned 2002-born forward Cohner Saleski and 2002-born defenceman Braydon Clark earlier this week. Saleski, drafted 17th overall in the 2017 WHL Bantam Draft, will be playing for the Prince Albert Mintos (SMHL) this season. Clark, picked in the third round in 2017, is suiting up for the Valley West Hawks (BCMML).

NEXT UP: The Raiders close out the pre-season on Saturday night at home against the Saskatoon Blades. Puck drop is 7 p.m. Then, the Raiders make the transition to the regular season for the home opener of the 2018-19 year against the Pats on Friday, September 21. The game begins at 7 p.m.