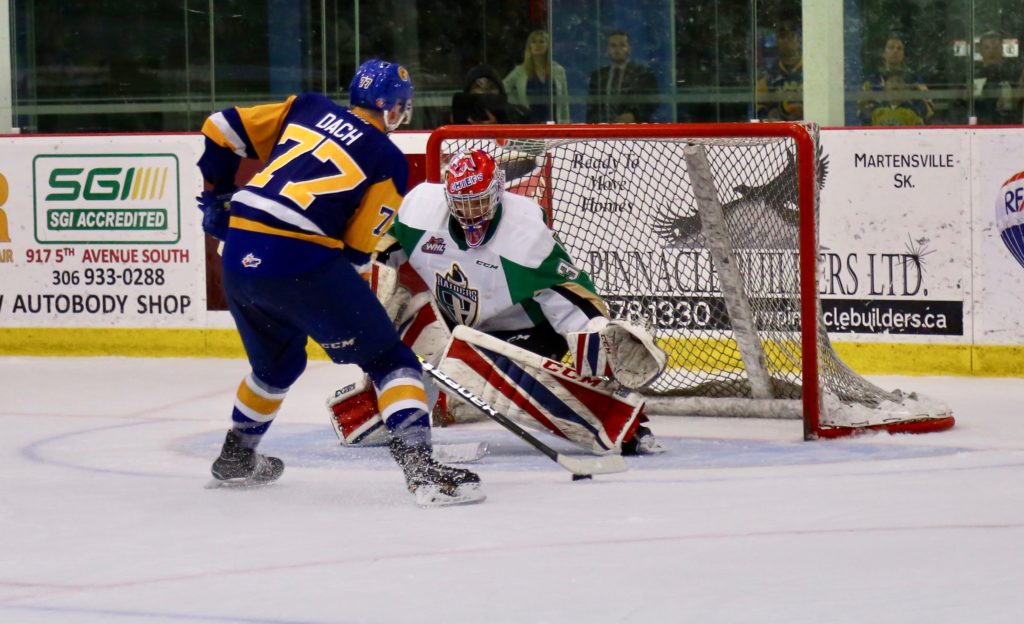 Warman, SK – Saturday night’s pre-season contest at The Legends Centre in Warman went the distance, but the Prince Albert Raiders (0-2-0-1) fell 4-3 in a shootout to the Saskatoon Blades (5-0-0-0).

Bradly Goethals and Michael Farren scored the lone goals in the shootout to give the Blades the win.

The Raiders jumped out to the early lead in the contest thanks to Spencer Moe. The Calgary product picked the far corner on goaltender Koen MacInnes from the left wing just 59 seconds into the game. Five minutes later, Kody McDonald extended the Raiders’ advantage. He buried a cross-crease pass just after a Blades penalty expired, putting Prince Albert up 2-0 after the first.

The Blades cut into the lead early in the second period. Kirby Dach beat Donovan Buskey 1:18 into the frame on the power play.

Less than two minutes later, the Raiders restored their two-goal lead. Lane Kirk’s shot from the point beat MacInnes to make it a 3-1 game.

Buskey kept the game tied later in the period. Josh Paterson was awarded a penalty shot with 1:41 left in the frame.

Both teams had power-play opportunities late in the third period with a chance to win in regulation, but the goaltenders stood tall for their respective teams.

Overtime saw action flow back and forth across the ice, including a span in the opening 41 seconds that saw Dach stopped on a breakaway by Buskey and McDonald turned aside on a partial break by MacInnes.

With no goals coming in overtime, the game entered the shootout. Dach, shooting first, was stopped by Buskey. The Raiders’ first shooter was McDonald, who was unable to solve MacInnes. In the second round, Goethals beat Buskey to give the Blades the edge after Leason failed to score. Farren ended the game with his goal in the third round of the shootout.

The Raiders head to Regina on Friday night to take on the Pats in their final road pre-season contest. Game time at the Brandt Centre is 7 p.m.