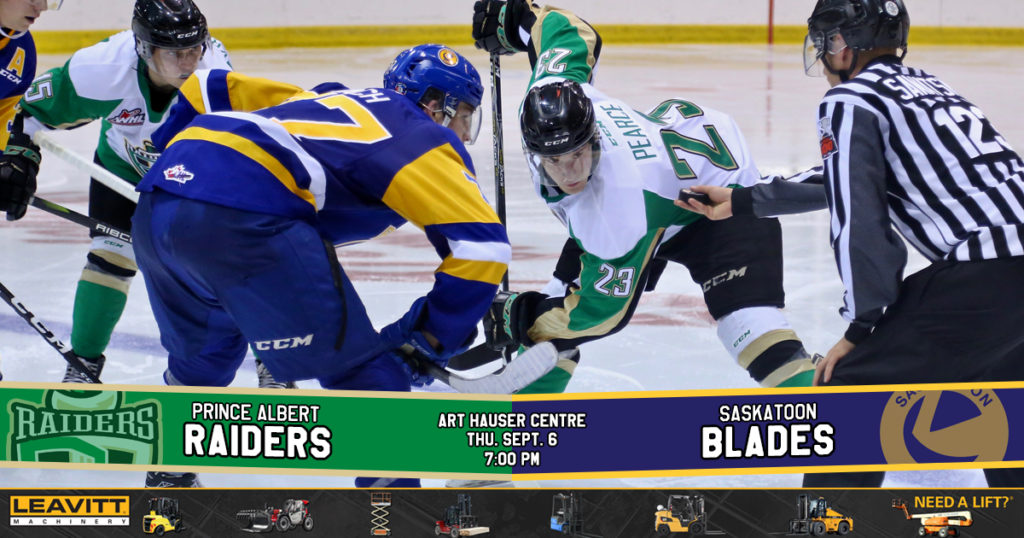 RAIDER REVIEW: The Prince Albert Raiders (0-1-0-0) continue their preseason schedule tonight when they host the Saskatoon Blades (3-0-0-0) at the Art Hauser Centre. The Raiders dropped the first of four preseason matchups between the clubs on Aug. 30 in the Young Guns Game. Justin Nachbaur and Sergei Sapego each had a goal and an assist in a losing effort. Brett Balas played the full game, making 19 saves in the contest.

SAPEGO AGAINST SASKATOON: Sergei Sapego has piled up the points in the last two contests against the Blades. In the final game of the regular season last year, the Belarusian blueliner had two goals. He added a goal and an assist during last week’s first pre-season game of the year. Sapego played in 41 games after being picked up on waivers by the Raiders last season, scoring four goals and adding 15 assists.

GONE CAMPING: Five Raiders are currently attending NHL training camps, leaving earlier this week. Cole Fonstad is heading to Montreal to join the Canadiens; Noah Gregor is in San Jose with the Sharks; Parker Kelly has returned to the nation’s capital to train with the Ottawa Senators; Brayden Pachal is off to Calgary for Flames’ camp; and Ian Scott is back with the Maple Leafs in Toronto.

ROSTER NOTES: The Raiders acquired 2000-born goaltender Donovan Buskey from the Spokane Chiefs in exchange for a  pick in the 2020 WHL Bantam Draft. The Vancouver, BC product posted a 10-10-0-0 record last season with a 3.56 goals-against average, a 0.871 save percentage and one shutout. The Raiders also reassigned 2003-born defenceman Nolan Allan to the Saskatoon Blazers (SMHL) and 2003-born winger Tyson Laventure to OHA Edmonton (CSSHL).

NEXT UP: The Raiders close out the home-and-home series with the Blades on Saturday night in Warman at The Legends Centre. Puck drop is 7 p.m. The next Raiders’ home game is on Saturday, September 15 as they close out the preseason schedule against the Blades. Game time is 7 p.m.