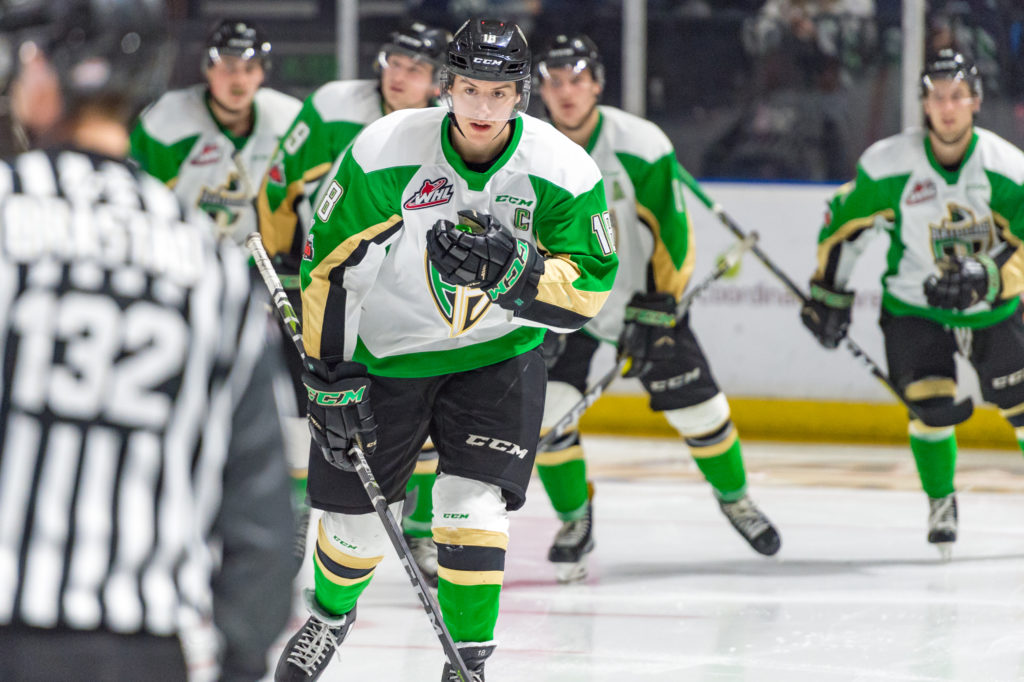 Kent, WA – Curtis Miske had three points in the third period to lift the Prince Albert Raiders (9-7-3-0) to a 6-4 win over the Seattle Thunderbirds (9-8-1-1) at the ShoWare Center on Tuesday night.

Miske had two goals and an assist in the final frame to help the Raiders overcome a 4-3 deficit. The Raiders are now 2-1 on their current six-game road trip.

The Raiders opened the scoring in an eventful first period. Brett Leason toe-dragged around a sprawling defenceman on a two-on-one and fed Spencer Moe who made no mistake in putting Prince Albert up 1-0 with his fourth goal of the season.

Three minutes later, the Raiders ran into penalty trouble again. With Justin Nachbaur and Sean Montgomery in the box, Austin Strand drew even for the Thunderbirds with his 10th goal. However, the Raiders got that goal during the second penalty. Brett Leason broke in shorthanded and snapped it past Matt Berlin.

Later in the frame, the Raiders extended their lead. Parker Kelly knocked down a cross-ice pass from Cole Fonstad and had a clear path to the net. The Ottawa Senators signee solved Berlin to make it a 3-1 game.

However, the Raiders were down two men again shortly after, setting the stage for Zack Andrusiak to beat Ian Scott for Seattle’s second five-on-three goal of the period.

The Thunderbirds tied the game just 40 seconds into the second period when Turner Ottenbreit blasted a slap shot past Scott on a shorthanded rush. With 5:46 remaining, Jarrett Tyska scored his first goal of the season after he cut to the net and was the beneficiary of a pick set on Miske before sliding it into the Raiders’ goal, putting the Thunderbirds up 4-3 after two.

Just 16 seconds into the third period, Miske tied the game from the side of the goal after getting a couple of whacks at a loose puck. Later in the period, Miske threw a perfect no-look, backdoor pass onto the tape of Jordy Stallard who tapped it into the empty net, extending his point streak to 12 games to put the Raiders up 5-4. Miske then scored the empty-net goal with 35 seconds remaining to seal the game.

Scott picked up the win in goal by making 26 saves for the Raiders, improving his record to 6-2 on the year. Matt Berlin stopped 26 Raider shots in the loss.

The Raiders are back at it tomorrow night when they head to Everett to take on the Silvertips (8-10-1-1) The next Raiders’ home game is on Friday, November 24 against the Swift Current Broncos on 80s Night Presented By Canadian Tire. Tickets are available at raiderhockey.com.