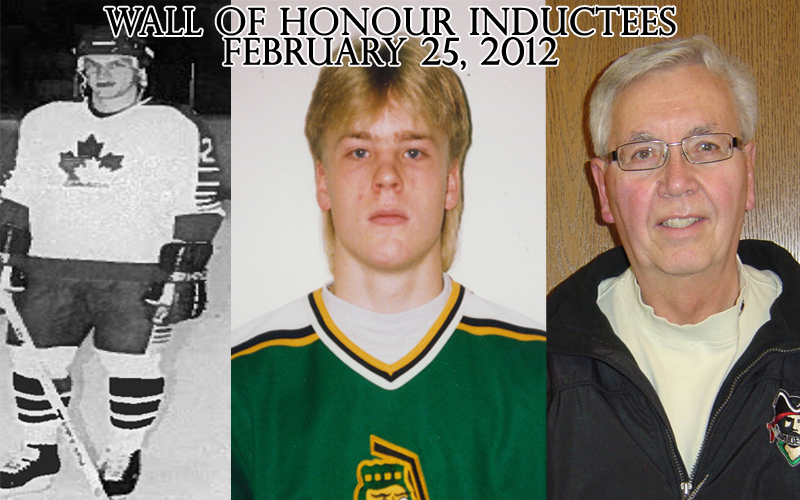 Prince Albert, Saskatchewan– The Prince Albert Raiders are pleased to announce the three inductees to join the Raiders Wall of Honour for the 2011-12 season. As nominated  by the Raider Alumni – Robin Bartel & Dean McAmmond in the Players Category, and as brought forward by the Past Presidents Gerry Bergen in the Builders Category.

The trio will be honoured at a special on-ice ceremony prior to the Raiders home game against the Kootenay Ice on Saturday, February 25th at 7:00 PM.

In his three seasons with the Prince Albert Raiders from 1979-82, Bartel took part in 3 Centennial Cup Championship games, winning the last two in 1981 and 1982. He helped add to the tradition of winning in 1979 when he was a large group of players that joined a Raider team that had only 6 hold overs from the previous year (1978-79), the teams’ first National Junior A Title winners.

In his three seasons Bartel played 180 games on the Raider blue line with 29 goals, 117 assists and 482 penalty minutes. He would add 66 points in 49 playoff games.

After spending a season with the University of Saskatchewan, Bartel joined former Raider teammates James Patrick and Dave Tippett with the Canadian National team in 1984 when they took part in the Olympic games in Sarajevo, Yugoslavia.

He would then turn pro playing 41 games in the NHL for Calgary and Vancouver and 185 games in the AHL for Moncton, Fredricton, Milwaukee and St. John’s. After a second stint with the National team and playing  in Britain in 1989-90, Bartel retired until returning to appear in 2 games for the St.John’s Maple Leafs of the AHL in 1993-94.

Dean McAmmond toiled 3 and a half seasons for the Prince Albert Raiders from 1989-93.  In 217 career games as a Raider left winger, McAmmond scored 97 goals, adding 129 assists. McAmmond was the key player in a 7 player deal with the Swift Current Broncos in January, 1993,  just after returning from helping Team Canada to a gold medal at the 1993 World Junior Championships in Sweden.

He was the Raider Rookie of the Year in 1990 and Playoff MVP in 1992 leading the Raiders to the Eastern Conference Final. McAmmond scored the game winning goal in the inaugural Chrysler Challenge Cup all star game pitting the best of the WHL against top players from Ontario and Quebec, held in Saskatoon in 1992.

In 1991, the Chicago Blackhawks made McAmmond their first round selection, 22nd overall, making his NHL debut in the 1992-92 season, still with junior eligibility left. McAmmond had 2 assists in 5 games with the Hawks as an 18 year-old.

He would go on to a 996 game NHL career with Chicago, Edmonton, Philadelphia, Calgary, St.Louis, Ottawa, New York Islanders and New Jersey scoring 186 goals and 262 assists.

Gerry Bergen has been a key volunteer at almost every Prince Albert Raider game since 1985 when Rick Wilson asked him to be a volunteer official. In the years following Gerry has served in every capacity as an off ice official as goal judge, penalty box attendant, spotter, time keeper and score keeper.

In 2001 Gerry became the Off-Ice Coordinator managing 14 volunteers and corresponding with the WHL Director of Officiating about new procedures and rules required.

Gerry has been active in minor sports all his life, as an original canvasser for the Comuniplex to minor hockey coach for 11 years, on the steering committee of the Centre Four league, president of the East End Community Club and off-ice official from the  Major Midget Mintos.

Bartel and McAmmond are the 13th and 14th former players to be honoured since 2007 while Bergen is the 9th inductee onto the Builders Wall of Honour. The Wall of Honour is located in the History and Heroes section of the Art Hauser Centre by the Raider Dressing Room.